ZentaoPHP framework enables the configuration and maintenance of ZenTao through commands.

The command line is very powerful, but it is a little bit complicated. So common scripts, such as scripts to back up the database and to update Burndown chart, have been provided in ZenTao 4.0+. Next, let's initialize these scripts.

After ZenTao is installed, there will be two scripts in zentao/bin, init.bat and init.sh, which is applicable to Windows and Linux respectively. These two scripts are basically used to generate command lines. Why is it configured like this? Scripts, such as checkdb.php and backup.php in bin was included in ZenTao, but these scripts must be configurated before using it. Once ZenTao is updated to the latest version, all the modified scripts will be overridden. So these two init scripts are provided to generate other scripts in ZenTao 4.0+. Now, let’s look at how to generate those scripts.

Use init.bat script in the Windows. For example, ZenTao is installed in i:\xampp


For Linux, init.sh is used. Take the Linux one-click installation package as an example.

3. Generate a one-click installation package via the control panel for Windows

For Windows one-click installation package, scripts can be generated through the control panel. 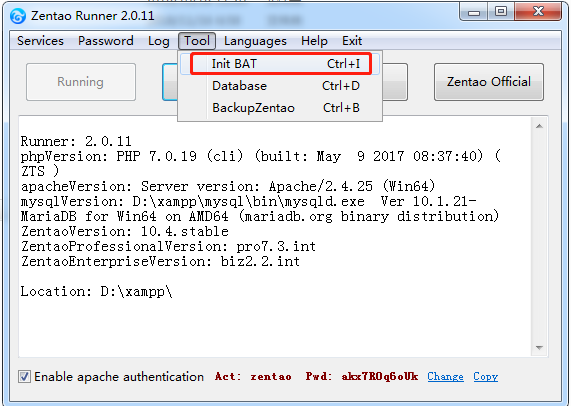 Notes: The access path of ZenTao is automatically calculated, when the scripts are generated through the control panel. So it might not be right. If it is wrong, you can execute init.bat manually to regenerate scripts.

4. Generate a one-click installation package through the control panel for Linux

For Linux one-click installation package, scripts will be automatically generated when executing start or start88 script to start ZenTao runtime. The scripts can be regenerated later through the init.sh mentioned above.


Notes: When generated through start or start88 script, the access path to ZenTao is automatically calculated. So it may be wrong. If it is wrong, you can execute init.sh manually to regenerate scripts.