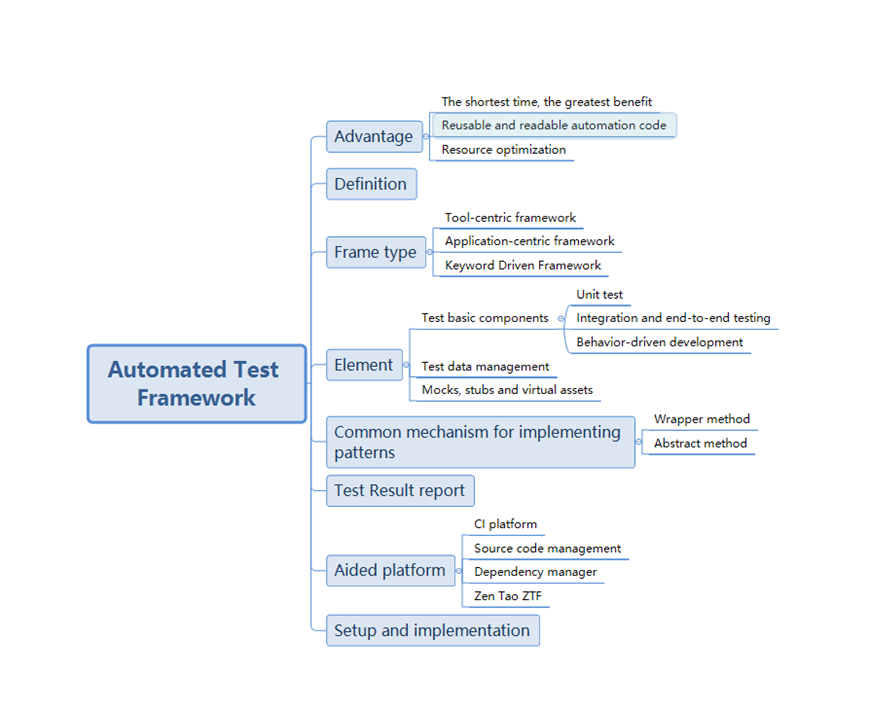 The popularity and advantages of automated tests do not mean a panacea. Customized projects, short cycles, test ease of use, and other situations are not suitable for automated testing. But there is no denying that if carefully planning and executing a mechanical testing framework indeed bring the following benefits to software development and testing companies.

Building any viable automated test framework and automated scripts maximizes the time spent writing and running tests, allowing for maximum output in a short period. In addition, with an excellent automated testing framework, manpower can be freed from these common problems such as synchronization, error management, local configuration, report generation, interpretation, etc

When you use the code mentioned in the existing component library, Big can rest that it is still readable and reusable for later times. All related tasks (such as reporting, synchronization, and troubleshooting) will become more accessible.

Some companies do not benefit from automated implementation as conceived, as the benefits from automated tests depend on the flexibility to adopt it. If automated systems are flexible and compatible with different teams engaged in various components, they can benefit from resource optimization and knowledge sharing.

Definition of the automated testing framework

In many other industries, "automation" refers to the automatic processing of processes through intelligent algorithms and techniques that run with little or no human intervention. In the software industry, automated testing refers to various testing of software applications through automation tools (either authorized or open-source versions). From a technical perspective, the automated testing framework is a customized set of interactive components that can perform scripting testing and comprehensively report the test results.

The type of the automated test framework

Serenity is another essential framework dedicated to tools, an accelerator built around the Selenium Web driver. In this case, to accelerate the test automation implementation process, the community combines specific components in a public entity.

Tool-specific frameworks such as TestComplete, Ranorex HP QTP are challenging to make explicit judgments because they are all pre-built by a deployed infrastructure with action simulators, reports, and script IDE.

Keyword keyword-driven framework can mainly attract novice developers and testers with little experience in coding, which can be either a tool-centric or project-centric framework. The keyword-driven framework involves unskilled coding employees in writing and understanding automated scripts. The keyword set used for encoding (e. g., login, NavigateToPage, Click, Type Text) is installed in the code library as a keyword repository, and a spreadsheet based on the provided keyword reference will be passed the keyword interpreter to perform the test.

If you want to implement a robust and high-performance test automation framework (whether open-source or commercial), certain components must be considered at their core. Some frameworks may include all the details, and others may consist of only a few, so don t have to involve all the points mentioned below in each framework.

The unit test base component can be a fundamental part of any automated testing framework. It can be used for the following situations:

While performing integration and end-to-end test automation, it is also very appropriate to implement the functions provided by existing test libraries. API level testing driven by the application UI requires components that eliminate the unnecessary coding burden, making it easier for interaction with the application-tested application. Therefore, testers are not troubled by the coding efforts of connecting to applications, sending requests, and receiving results.

Components specifically for BDD create executable specifications in the form of executable code. In this section, the tester can convert the different features and scenarios of the predicted behavior into code. Although unlike other testing tools, which can directly interact with the tested application, they can support the BDD process to create activity documents consistent with the scope and intent of the automated test. Typical examples of BDD components are cucumber (main languages), Jasmine (JavaScript), SpecFlow (for.NET).

The most considerable difficulty in software test automation and test creation is how to utilize test data management systems. As the number of automated tests increases, there is always a problem of ensuring that certain test data required to perform a specific test is available or created when executed. There is no foolproof solution for this situation, requiring reliable test data management methods to make automation work successfully. So, the automated test framework employed needs to be fully configured to provide essential remedies to enter or create and clear the test data to be performed. The solution to this problem is to use appropriate simulation tools to make the data more accessible, clearer, and easier to understand.

During the practice and exploration of automated testing:

● You want to isolate the module from the connected component experienced in unit testing.
● Processing the tedious and critical dependencies common in the integration of modern applications, or end-to-end testing

In these cases, it feels necessary to create mock, stubs, and virtual assets to reflect the behavioral patterns of connected components, and may also find processing phony and stub a broad, large-volume task. In any case, testers will realize that it is essential to choose helpful virtualization tools while developing an automated testing framework.

The universal mechanism for implementing the mode

In addition to the automation as mentioned above framework components, there are several valuable mechanisms to help create, use, and maintain automated tests, for example:

Abstraction methods： Abstract mechanisms imply improved readability and concealment of redundant details. For example, the purpose of using a page object when creating Selenium WebDriver tests is to expose user input operations on a web page, including entering credentials or clicking somewhere on the page, and the goal is to achieve advanced testing methods bypassing beyond or bypassing the needs of exploring specific elements of the page. This method applies to many similar applications and automated tests.

When choosing a library or mechanism to report test results to the automated framework, you need to take the target audience to view this report into account. In this regard, the following considerations should be followed:

● The information generated by unit testing frameworks such as Junit and TestNG is mainly for receiving systems like CI (continuous integration) servers, which are eventually interpreted and presented in the XML format available to other software.

● When using languages that most people can understand as tools for reporting, you may need to consider using business tools compatible with the unit testing framework, such as the UFT-Pro for Junit, NUnit, and TestNG.

● An alternative is to use third-party libraries such as ExtentReports that create test results reports in an easy-to-understand format, including visual interpretation through pie charts, graphics, or images.

In addition to the automated testing framework itself, some auxiliary platforms associated with continuous integration will also be beneficial to automated testing. For example, CI can perform deliverables deployment, test scheduling; the source code platform can manage code for the product and test script; dependency manager is generally a dependency management tool for a language library, such as universal java types developed with nexus management employees; Zentao ZTF contains features such as continuous integration, unit testing, and version library management. 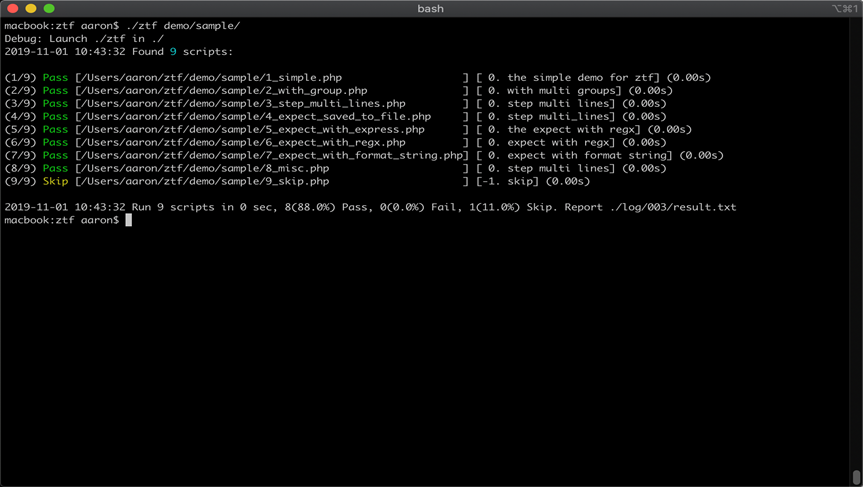 The primary purpose of the Dependency Manager is to assist in the collection, managing existing dependencies and libraries that have already been applied in the functions of automated software solutions. Some tools (such as Maven and Gradle) act as dependency managers and help build tools. The build tool is designed to help you develop automated software and run tests from the source code and support libraries. Tools for this aspect include Ant, npm, and NuGet.

ZTF supports seamless integration with Zentao, binding Zentao use cases and automated test scripts one by one. Execution results can be submitted to Zentao as test results, and executing failed scripts can also automatically create a bug. The ZTF automated testing framework enables continuous integration capabilities with Jenkins. After the user initiated the task, the user automatically executed the test script through ZTF and returned the unit test results to Zentao. The two cooperation opened the continuous integration closed loop.

Here are several ways to plan for automated test solutions:

● Explore the practical applicability of automation from a customer perspective, check its good appearance from all views, and test it on underused technology. In contrast, automated testing is unnecessary if the efforts of mechanical development greatly exceed the expected advantage.

● It is crucial to keep a close eye on the system-tested techniques to find the most suitable automated testing tools that can perfectly simulate the user behavior.

● A phase-based implementation is recommended, where each stage has a priority for delivering automated test scripts while adding framework functionality for the expected script execution.

● Before starting the software automated test, to ensure proper implementation of automated decisions, the postimplementation of ROI, proof of concept, time of the manual regression or smoke test run, and the number of running cycles for each version must first be estimated.

The best way to build a mature, sophisticated, and flexible automated testing framework architecture is to start small, frequently test and review, and gradually build extended versions to a higher level. It is easy to prepare numerous automated tests early on and see the working framework faster to avoid conflicts or damage during the computerized testing phase later.

Chen Qi, a senior agile test consultant, as a team member of ZenTao, a well-known domestic project management software, is mainly responsible for the open-source automated test management framework-the development of ZTF. With more than ten years of practical experience in the agile process, he is now committed to the practice and research in test automation and DevOps.