Kubernetes has excelled in the container orchestration field. It is a container-based cluster orchestration engine with the ability to scale clusters, rolling upgrade rollback, elastic scaling, automatic recovery, service discovery, and many other features.

This article takes a quick look at Kubernetes and explains what we're talking about Kubernetes. 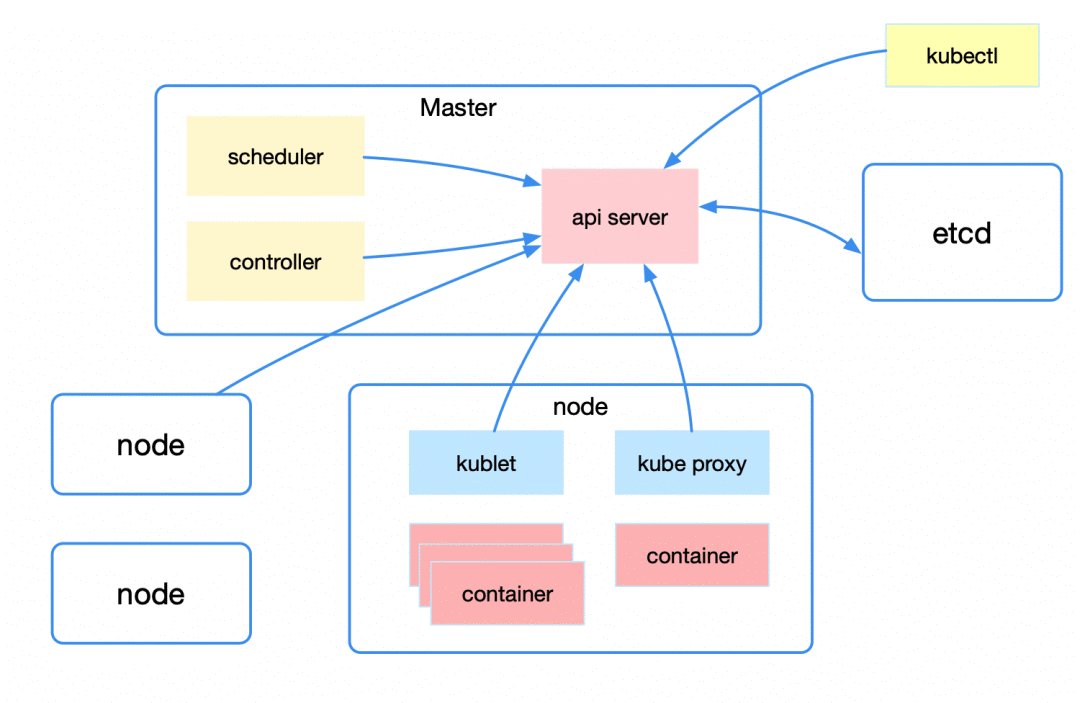 From a macro perspective, the overall architecture of Kubernetes includes the Master, Node, and Etcd.

The Master, which is the controller node, is responsible for controlling the entire Kubernetes cluster. It includes the API Server, Scheduler, Controller, and other components. They all need to interact with the Etcd to store data.

Node, the working node, provides the computing power for the whole cluster and is where the containers run, including running containers, kubelet, and Kube-proxy.

Starting with the creation of Deployment

A deployment is a controller resource used to orchestrate a pod, which we will describe later. Let's take deployment as an example and see what each architecture component does in creating a deployment resource.

At this point, the Kubernetes components have coordinated their work, creating a deployment request and ending with each specific pod running properly.

In the many API resources in Kubernetes, the pod is the most fundamental, the smallest unit of deployment.

The first question we need to consider is why we need a pod. The pod is a container design pattern designed for containers that are "super close" to each other, so we can imagine scenarios where servelet containers deploy war packages, log collection, etc. These containers often need to share networks, storage, and configuration; hence we have the pod concept. 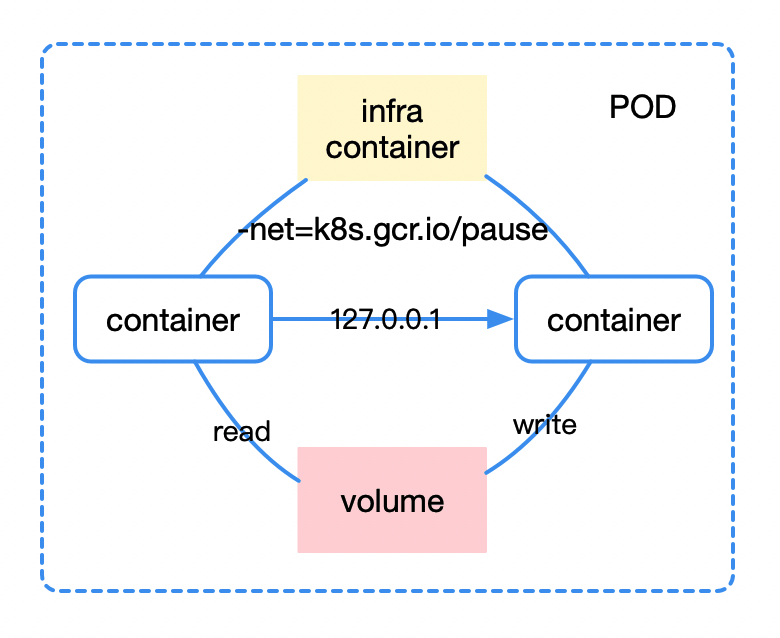 For the pod, the external network space is unified among the different containers using an infra container. The same volume naturally shares the storage, e.g., it corresponds to a catalog on the host.

Let's take deployment as an example. The relationship between deployment, replicataset, and the pod is one of mutual control. In simple terms, the replicaset controls the number of pods, while deployment controls the versioning properties of the replicaset. This design pattern also provides the basis for two of the most basic deployment actions: horizontal scaling for quantity control and update/rollback for version attribute control. 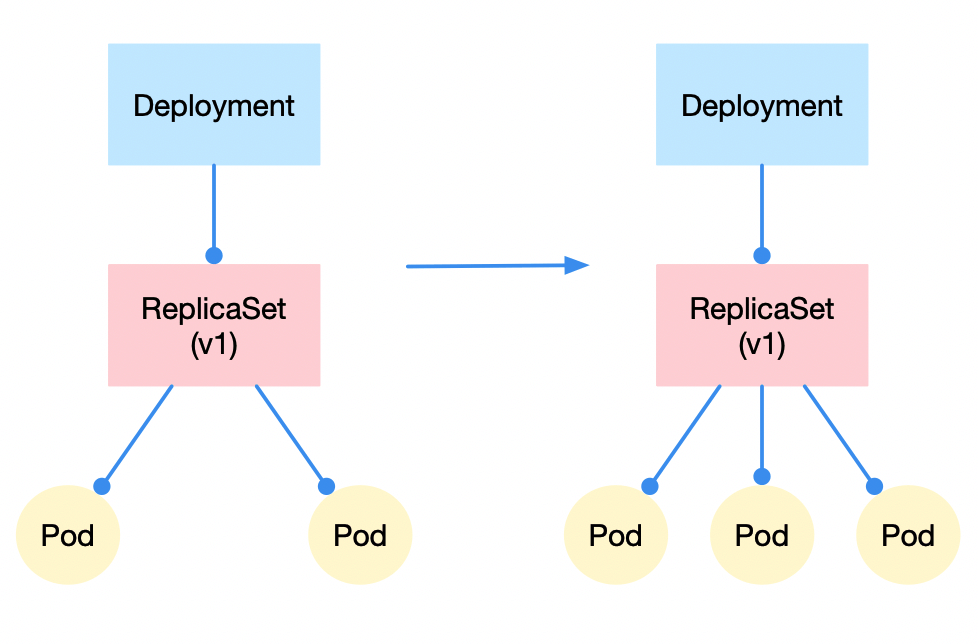 As you can see, in the above example, we update the application, and the pods are always upgraded one by one, and a minimum of 2 pods are available, with a maximum of 4 pods serving. The benefit of this "rolling update" is obvious, if there is a bug in the new version, the remaining 2 pods will still be available, and it is easy to roll back quickly.

We understand how container arrangement is made, but how do containers communicate with each other? When it comes to network communication, Kubernetes needs to have a "three-way" foundation:

Before we get to the rest, we need to understand a very important resource object: service.

Why do we need a service? A pod can correspond to an instance in microservices, so a service corresponds to a microservice. The presence of service solves two problems in the service invocation process.

With the above "three-way" network foundation, we can see how network calls in microservice architectures are implemented in Kubernetes.

The first is the east-west traffic call, i.e., the inter-service call. This consists of two main types of calls, namely clusterIp mode and dns mode.

ClusterIp is a type of Service where Kube-proxy implements a form of VIP (virtual IP) for the Service via iptables/ipvs. You only need to access this VIP to load balance access to the pod behind the Service. 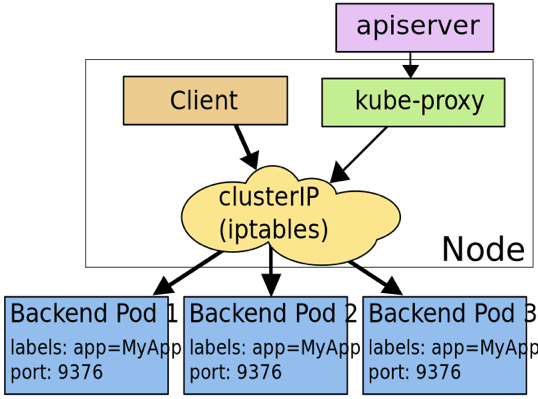 The diagram above shows one implementation of clusterIp, the userSpace proxy mode (which is largely unused), and the ipvs mode (which offers better performance).

The DNS mode is easy to understand. A service in clusterIp mode has an A record of service-name.namespace-name.svc.cluster.local, which points to the clusterIp address. So, in general, we can call service-name.

A nodePort is also a type of service that allows access to the service behind it by calling a specific port on the host through iptables.

Loadbalancer is another service implemented through a load balancer provided by the public cloud.

We want to access the internal Kubernetes cluster through a unified external access layer, which is what ingress does. Ingress provides a unified access layer that matches different services on the back end with different routing rules. ingress can be thought of as a "service of services." ingress is often implemented in conjunction with nodePort and loadbalancer.

So far, we've got a brief overview of Kubernetes, how it generally works, and how microservices run in Kubernetes. So when we hear people discussing Kubernetes, we can know what they're talking about.