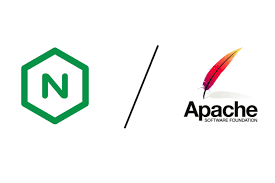 Web server is a key factor that directly has an effect on the performance of the website. It is also an issue that each webmaster consider when choosing the operation environment for a website. There are many web servers available, and Apache, Nginx and Microsoft's IIS are the mainstream. This article is to compare between Apache and Nginx, so that users can choose their own Web server.

Apache was founded in 1995 and has been developed by Apache software foundation since 1999. Apache is flexible and efficient with rich extension modules. It has an active community, and has become a mainstream open-source Web server around the world.

Nginx is a free and open source Web server written by Igor Sysoev, a Russian Software Engineer. Since its launch in 2004, Nginx has focused on high performance, high concurrency and low memory usage. Its characteristics such as load balancing, caching, access, bandwidth control and efficient integration with various applications have made it popular among users.

Although Apache and Nginx have different backgrounds, their purpose is the same, which is to receive user requests, process requests, and finally return the results to the user.

The biggest difference between Apache and Nginx is how they handle connections. Apache provides a series of multiprocessing modules through which to use the resources of the operating system, manage the process and thread pool, and control the processing of user requests. Nginx, unlike Apache, is an asynchronous, nonblocking and event-driven method. Its operational process is single thread, and each thread processes a large number of user requests asynchronously. The following is the operational principle of Nginx: There is a reason for its existence. Apache and Nginx have their own pros as webservers. They would not replace each other in a short future. The user should take the background of their application into consideration, and choose one according to their requirements and circumstances.